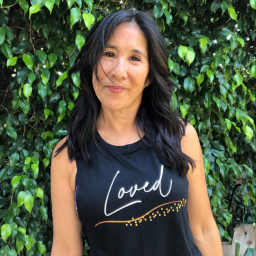 Kim Nishida is a bestselling author and host of the Soul Connection Club. She’s passionate about helping women get curious about the stories that no longer serve them so they can recognize and release the false layers of identity that keep them stuck, trapped, and dissatisfied with life.

Be Sure to Request Your Free “Soul Connection Reset” Digital Gift Box...

Being Moved by Your New Moon Intentions

Ritual for Your Summer Solstice

What Are You Waiting For?

In fact, you might have all sorts of reactions to that greeting…

And if any of those things came up for you, I highly encourage you to keep reading, because what you’re about the read just might be one of the most important and life-changing messages you’ll receive all day and indeed, even in your whole life.

Why? Because you aren’t really who you think you are.

Let me state that another way…

You aren’t really who you fucking think you are.

You have become a master of disguise of many years, decades, a lifetime. So much so that now even you buy into this persona you have been acting out and have so cleverly created as a survival mechanism.

I’m willing to bet that from a very young age, you had a passion, hunger, desire, innate ability to simply see things differently than most people. You wanted to create beautiful and sometimes odd and bizarre things. Creation was something that came naturally to you and was your way to play and live life.

And somewhere along the way, you received a message, well probably many messages. In fact, too many fucking messages. That the way you created, the stories you wanted to tell, the way you saw the world was wrong…

And over time, having received that message many at a truly pivotal time or just because you were bombarded by it over and over again…you bought into that belief.

And not only that your creativity was wrong, but that YOU were wrong.

And you believed them.

And over time you agreed with them.

It’s only naturally, sweetie! Don’t be hard on yourself. Believe me…we’ve all been there, us weirdos! I spent my entire life being someone else because I bought into the notion that the real me was something to be hidden away.

I became a fucking great master of fooling people into thinking I was someone who I’m not. I was brilliant in fact.

Everyone thought I really had my act together.

When the whole time, I was living a lie.

And although it was a very nice life with no complaints, it wasn’t a reflection of who I truly am.

Does this strike a chord with you?

Do you have even a faint sense of recognition that my story is somewhat similar to part of your own?

Are you a truly fantastic imposter in your own life, playing a role that you think will be more acceptable in society, to your family, etc than if you were to truly be who you are?

And at the same time, do you have this occasional recognition that something isn’t right? Or maybe it’s a wisp of longing or the mere flutter of a passing memory of the past. Of a time when you felt freer, happier, joyful even just being yourself.

And do you see other artists (actors, writers, musicians, performers, painters, sculptors, graphic designers, etc) who have finally “made it”. And you hear them tell their stories of how they were bullied in school and faced what seemed like endless rejections before they finally got their big break. It was their dedication and perserverance  that paid off in the end.

And then you feel this twinge inside. This longing or admiration or envy or jealousy. And then it turns into,

“I didn’t have what it takes. I didn’t try hard enough. I wasn’t disciplined enough. Why did I give up? I’m such a loser. It’s too late now anyway.”

And you tell yourself, “Good for him/her!”

And you go about the rest of your day.

And it’s a nice life you have. You shouldn’t complain.

There is still this part of you that you have locked away and kept hidden because that’s the only thing you knew to do in order to survive. It’s only natural to want to fit in. No one likes to feel like an outsider.

But there comes a time (and I believe that time is now for you) when you have to love yourself for exactly who you are. For ALL the parts of you. Good and bad.

And there comes a time when you just need to fucking decide to be yourself no matter what.

Even if that means you do it in some small ways at first and perhaps in the privacy of your own home.

Maybe start just by entertaining the possibility that you can be you.

That you can love yourself.

That you CAN create and do your thing.

Be kind. Be gentle.

And simply sit with those questions and maybe journal out the answers.

Of course, I would love to hear what comes up for you!

Remember, you’re such a weirdo. And I love that about you!